The Middletown Water Department was created on July 20, 1865 when a bill entitled "An act to Provide for a Supply of Pure and Wholesome Water for Public and Private Purposes in the City of Middletown" was passed by the Connecticut General Assembly. With the creation of the "Middletown Water Works," the Laurel Brook Reservoir and a pipeline to the City were constructed.

The limits of the original distribution system covered the area roughly between High Street and the Connecticut River; and Washington Street and Warwick Street.

As the population of Middletown began to increase, the need for more water supply was identified and, in response to that need, a proposal to enlarge Laurel Brook Reservoir was presented. This proposal was considered too costly so alternatives were sought.

On December 15, 1896 the citizens of Middletown voted to build a new reservoir at Mount Higby. On November 24, 1897 the project was completed and on March 10, 1898 water was delivered from the reservoir to the City. Following World War I, the Water Department began installing meters on its services. This had the effect of lowering overall water consumption so that the then available supply proved sufficient until 1940.

Today, there are 10 active wells in this well field operating in series as the primary source of water for the City. This well field serves approximately 80% of the total system water consumption. 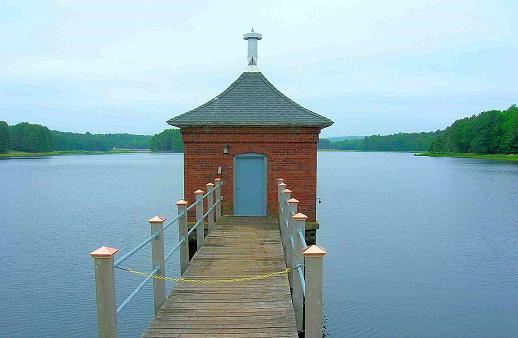 Today, the Department provides water service to nearly 90% of the City’s current population. This is consistent with the 2011 Water Supply Plan Update.